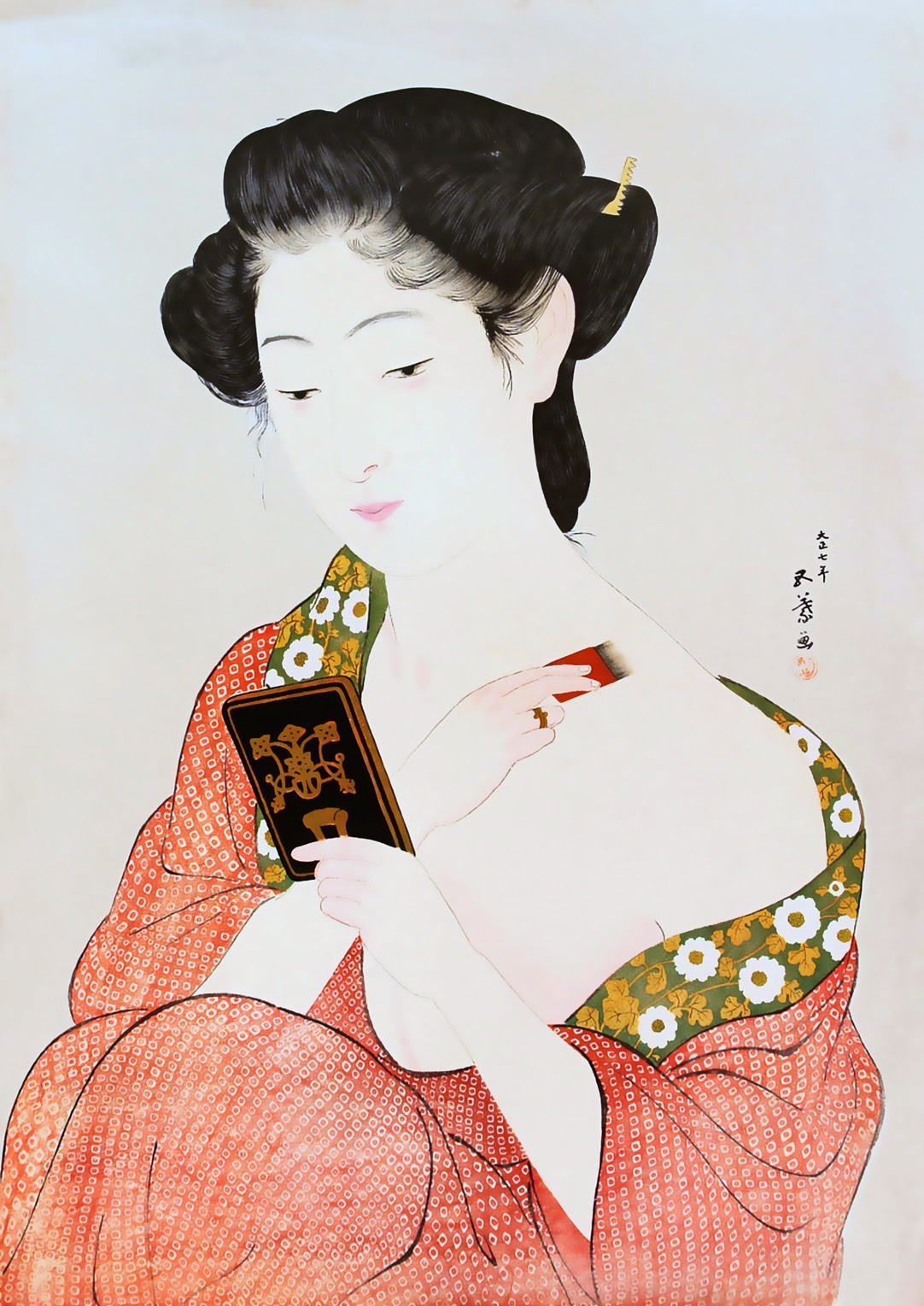 Hashiguchi Goyō (橋口 五葉 Hashiguchi Goyō, December 21, 1880 - February 24, 1921) created only 14 published prints during his life-time — the first at age thirty-five and the last shortly before his death at forty-one. These prints are among the finest and most expensive modern Japanese prints a collector can buy and made Goyo immortal. If Hashiguchi had not been of such frail health, he could have become the leading Japanese artist of the twentieth century.
Hashiguchi was born as the son of a samurai in Kagoshima as Hashiguchi Kiyoshi. He was taught in traditional Kano painting by his father, an amateur painter, from the early age of ten. Later he went to Tokyo, called himself Goyo and studied Western oil painting at the Tokyo School of Fine Arts, from which he graduated in 1905 as the best student of his class.
His first commission was an illustration for a book titled I am a Cat by Natsume Sōseki in 1905. In 1907 Hashiguchi won the first prize in a contest for an ukiyo-e poster. This brought him some public recognition and one would have expected the artist to jump into creating more Hashiguchi prints but he was disappointed by an unenthusiastic public in future shows. In 1911 he again won recognition for an ukiyo-e poster designed for the Mitsukoshi department store. From that point on he became a serious student of ukiyo-e and began to study ukiyo-e from books, originals, and reproductions. He was especially interested in the great classical ukiyo-e artists. He was especially interested in the great classical ukiyo-e artists. From 1914, while frail and suffering from beriberi, he contributed articles on various ukiyo-e studies to Art News (Bijutsu-shinpō) and Ukiyo-e magazine, and wrote several articles about Utamaro, Hiroshige and Harunobu on a scholar-like level.
In 1915, urged by the shin-hanga publisher Watanabe Shōzaburō, he designed a print for artisans to produce under Watanabe’s direction. Goyō designed "Bathing" (Yuami), Watanabe wanted to continue the collaboration but Goyō had other plans. Instead, he worked in 1916-1917 as supervisor of reproductions for 12 volumes called "Japanese Color Prints" (Yamato nishiki-e) and in the process became thoroughly familiar with the functions of artisan carvers and printers. At the same time he was drawing from live models. From 1918 until his death he produced thirteen more prints - four landscapes, one nature print depicting ducks and eight prints of women. His total production, including "Bathing," numbers fourteen prints. (After his death a few more of his designs were developed into prints by his heirs.)
The first Goyo Hashiguchi print titled Woman in bath or Yuami was a terrific masterwork. Watanabe was enthusiastic and wanted to continue the cooperation with Hashiguchi. But the artist had other plans. Probably he was feeling too much restricted in his artistic freedom by the successful but rigid and business-like Watanabe.
In late 1920, Hashiguchi's latent health problems escalated into meningitis. He supervised his last print Hot Spring Hotel from his death bed in hospital, but could not finish it personally. He died in February 1921.
Goyo had left several sketches from which his heirs — his elder brother and his nephew — had later produced seven more prints. The carving and printing had been commissioned to Maeda Kentaro and Hirai Koichi.


Goyo Hashiguchi prints are of extremely high quality standards. They were sold at very high prices at the time of their first publication and sold well nevertheless. The tragedy of Hashiguchi was the short time span of only two years to produce these superb masterworks - apart from his first print published with Watanabe.
Posted by Hayato Tokugawa at 7:14 AM