Born in 1907, OKUYAMA GIHACHIRO studied art under Kasaka Gajin and during the very tough economic times of the 1920s, primarily making a living designing posters and advertising labels eventually for commercial companies. In 1931, he had built up a sufficient reputation and enough money to establish his own advertising company; yet all the while,  very active in both Japan's Sosaka and Shin Hanga art print moments, creating woodblocks which were exhibited in within these organizations. Following WW II, in 1946 he established the Japan Print Institute or Nihon Hanga Kenkyusho, and continued to work as a woodblock artist for most of his life. His prints display a fine and creative style and they are among the rarest of Shin Hanga woodblocks to be found today.

In this print, Divan Japonais - Toulouse-Lautrec, dated 1956, Okuyama again pays tribute to Toulouse-Lautrec in an interpretive reproduction of a famous print of May Belfort, an English singer who became famous on the stages of Parisian nightclubs with light hearted songs and her perpetual companion, a black cat.

From the 1860s, ukiyo-e, became a source of inspiration for many European impressionist painters. They were affected by the lack of perspective and shadow, the flat areas of strong colors as in Japanese prints. Here, Okuyama returns the genre of impressionism back to its Japanese roots. 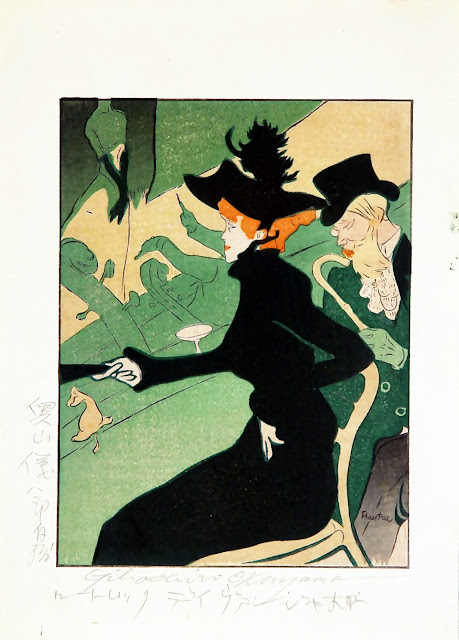 Posted by Hayato Tokugawa at 4:21 PM