Tadamasa Ueno is most noted for his dramatic kabuki actor prints, many of which bear a resemblance to the highly stylized figures of ukiyo-e. Born Ueno Kitsumi, he studied from an early age with Torii Kiyotada (Torii VII); the Torii family representing a long line of artists closely associated with the kabuki theater and with printmaking as far back as the 17th century. Another member of the famous Torii family, Torii Kotondo, was designing prints around the same time. As was traditional among many ukiyo-e artists, his artist name Tadamasa was partially derived from his teacher's name, both containing the syllable tada.
In 1940, Tadamasa met Watanabe Shozaburo to discuss publishing woodblock prints based on his kabuki paintings; a meeting which resulted in a collaboration on two series of actor prints. The first series titled Eighteen Kabuki Makeups (Kabuki kumadori juhachi ban) was published duringfrom 1940 to 1941, with one print being released each month. An additional print, New Year’s Fortune Sanbaso Makeup, was included with this series. All of these prints were signed with the Tadamasa signature, but with a variety of different seals.

After the first series was completed, Watanabe began publishing a second series of kabuki makeup (Zoku kumadori juhachi ban), but was forced to abandon work due to war shortages. Only seven prints in this series were ever completed. After World War II, Tadamasa continued to work as a kabuki artist designing billboards for the theater in Tokyo. In 1949, he was accepted as a member of the Torii family and granted the name Torii Tadamasa.

During the early 1950s, Tadamasa worked on several series of kabuki prints with the publishers Shokokusha and Dairesha. With Shokokusha, he designed a 12 print kabuki calendar series as well as a series of 18 kabuki prints (Kabuki juhachi ban). These prints were carved by Okura Hanbei and Nagashima Michio, and printed by Shinmi Saburo. With the publisher Dairesha, Tadamasa designed another series of 18 kabuki prints titled One of Eighteen Kabuki Plays (Kabuki juhachi ban no uchi). This series was carved by Maeda Kentaro and printed by Ono Hikojiro.

This particular print dted 1952, is from on of the kabuki dynasty, Ichikawa family's 18 famous plays. "Sukeroku". Swashbuckling hero, Sukeroku. 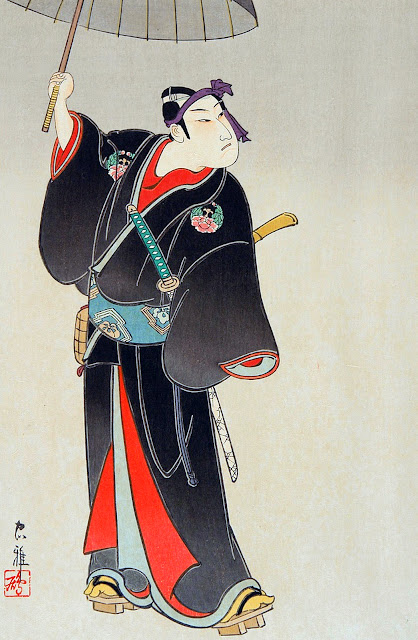 Posted by Hayato Tokugawa at 4:47 PM